Here are a couple of interview exercises I like to give, which are relatively open to varied approaches.

Before the interview: Form validation

What I think makes it really good is that it’s possible to approach this in many different ways – and there are lots of things for candidates to demonstrate beyond the basic implementation of the form validation – knowledge in any of those areas:

Form validation is a particularly interesting problem in web development because there is a fair amount of state to manage – validation errors for each fields, as well as whether the fields have been interacted with or not to decide when to display the errors.

Candidates can take a shot at this with vanilla JS, a ready-made library like Parsley, or can be asked to do this with React (Redux Forms, Formik, bespoke?), or even back-end technologies.

At the interview: Build This

This is my go-to “how would you do this” problem, initially encountered at Codemate, which can be used to interview full-stack developers (any stack), or front-end or back-end only. The candidate is shown a specific UI (via a wireframe, screenshot, or real-world app), and is then asked to explain how they would build it within the context of a real project.

Depending on the candidate’s experience level, role, (and level of interview stress), this can be run as an open-ended conversation driven by the candidate directly, or as a series of guided themes / questions.

The whole exercise takes 30min to 1h depending on what is covered – spend a good 5 mins on the problem statement + intro & architecture, then move through the themes.

This works particularly well if the wireframe has quite a few things going on visually, with different types of data, a user account, and a form or two. 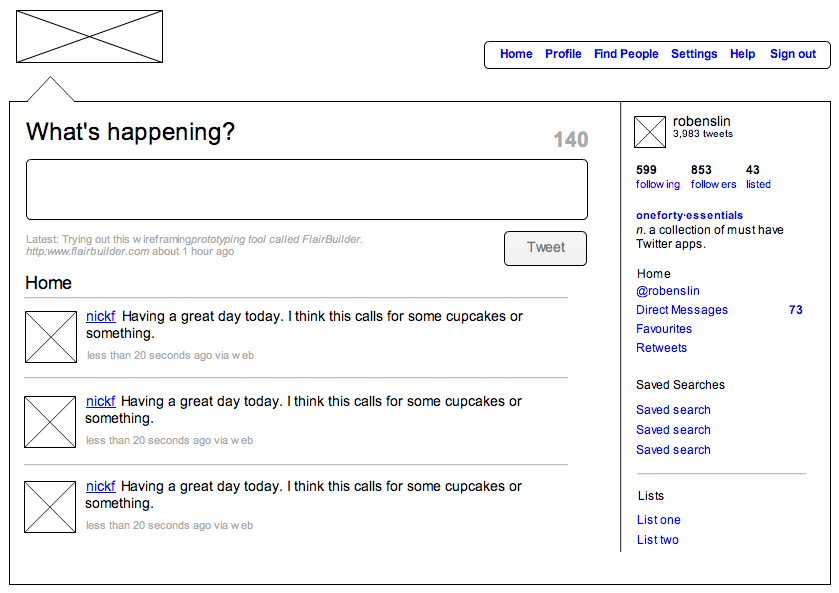