Ever heard of Draft.js? We are rebuilding Wagtail’s rich text content management using this rich text editor framework from Facebook. Apart from a new editor, Draftail, we also needed an exporter to convert Draft.js content to HTML: the aptly-named draftjs_exporter.

In this post I’ll focus on this critical piece of the puzzle, which needs to operate as fast as possible regardless of how much content it has to handle. Memory profiling and benchmarks in a Python ecosystem were new to me, so here is what I learned along the way.

Why this was necessary

This may seem obvious but is worth stating: to improve performance, the first step is to measure it. It’s easy for developers to start optimising code based on instinct, but tooling is available to identify which parts are actually worth focusing on, which performance bottlenecks are the biggest. The general wisdom is to focus on hot paths (parts of the code executing often, eg. in loops), and apply the 80/20 rule: focusing optimisation efforts on some key parts of the code can reap much of the performance improvements. That said, measuring is the only way to know for sure how much of an improvement each potential change would make.

To me, the golden standard for performance profiling is the Chrome DevTools. It profiles CPU, GPU, memory, network, frames rendering speed, and lots more, all out of the box without any change of the code. Here is a good illustration, profiling the load of Draftail’s demo:

Can you spot for how long the toolbar looks broken because the icon font isn’t loaded yet?

Performance tooling in the Python ecosystem isn’t as simple to use. Lucky for us, the workload of the Draft.js exporter is much simpler: Draft.js content in, HTML out. We can focus on two metrics:

There’s a built-in module for this! Yay! The cProfile module is part of the standard library, has little overhead, and provides insights into which parts of the code are slow with minimal work. Combined with pstats (built-in too!), its output looks like:

From this, we learn that:

Here is minimal code that produces such a report. The actual output comes from benchmark.py in the Draft.js exporter repository.

Did you see how simple it was to get a basic but effective speed measurement? No pip install, just a couple of imports, a few more lines and voilà! Too bad memory profiling isn’t as simple. I’m still learning how best to do this, here is what I found out so far.

The best package I found for this is memory_profiler. It provides line-by-line profiling of functions, which makes it invaluable to investigate specific parts of a program. Here is a sample output, again from benchmark.py:

What’s cool about memory_profiler is that it also comes with a way to chart memory usage over time, using Matplotlib: 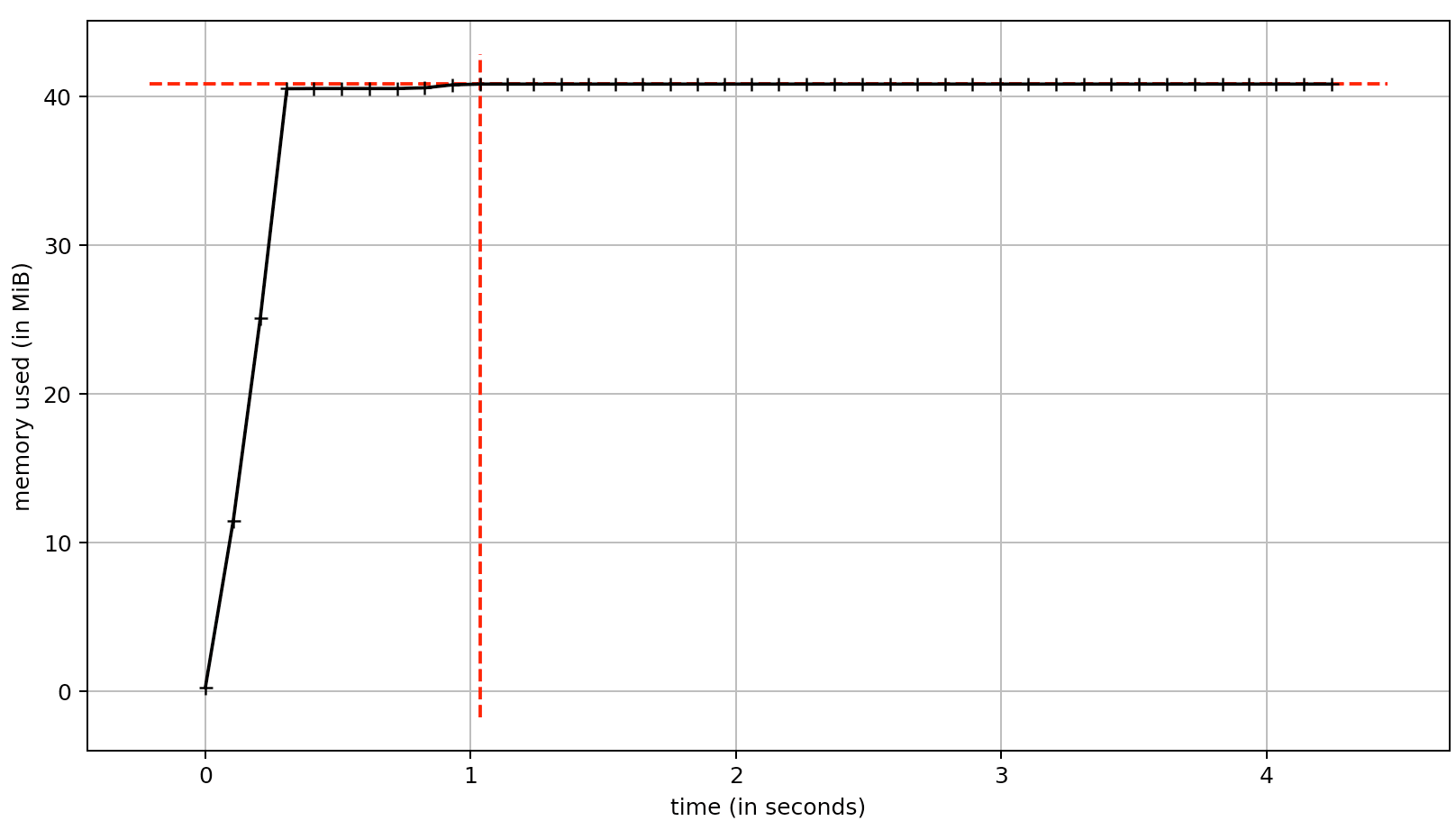 Here, we can see that after a sharp increase in memory usage, the memory consumption is mostly flat over the execution of the script. Unfortunately, using the profiler to understand where this memory consumption comes from takes quite a bit of manual work and fiddling with the code. The profiler is limited to line-by-line reporting for functions annotated with the @profile decorator or full-script over-time consumption, it has quite a big overhead which makes it impractical to run frequently (say on every code change), and most importantly there is no notion of “cumulative” memory consumption for a function. Calling a function 10 times will produce 10 separate reports.

Then again, getting that much information was easy:

And to produce the chart:

I’m still exploring how best to leverage memory_profiler. Its author has a great blog post that goes more in depth. For the exporter, I was able to identify that most of the memory consumption comes from loading the code, rather than its actual execution:

All of those numbers are interesting on their own, but without any context it’s hard to judge of their significance. For a while, the exporter was profiled with a content load equivalent to a small blog post – A good indicator, but not the most representative of the types of site it’s meant for (large-scale, content-driven, hundreds of pages of rich text). To address this, I built markov_draftjs: a repository of sample content representative of a big website, with the content equivalent of about 200 pages of rich text. The actual content is computer-generated with Markov chains of Project Gutenberg books, while the specific rich text features in use (and their frequency in the content) match the load of a real CMS-driven site.

The takeaway is: without a good benchmark, it will be harder to judge whether given optimisations actually make a difference in real-world performance!

Coming back to the purpose of this work, we wanted to make the exporter faster. @su27, an early adopter, started this conversation with performance feedback and profiling help.

This quickly led to a 20-30x (!) speedup, from 500 to 10ms for the sample “blog post size”. This one improvement came from a single line of code, perfectly illustrating the importance of the 80/20 rule. With these “low-hanging fruit” optimisations out of the way, the biggest performance bottleneck was the HTML generation, which led us to change the exporter API to allow custom HTML-generating engines to facilitate iterations on this code. If you want to learn more than necessary about lxml vs html5lib vs (or with!) BeautifulSoup, the Draft.js repository and its issues contain plenty of notes.

With the performance tooling in place, we were then able to check that new features added to the exporter would not degrade its performance, and to make incremental improvements by changing its content parsing logic. We made good progress from version to version, all the while adding more functionality: 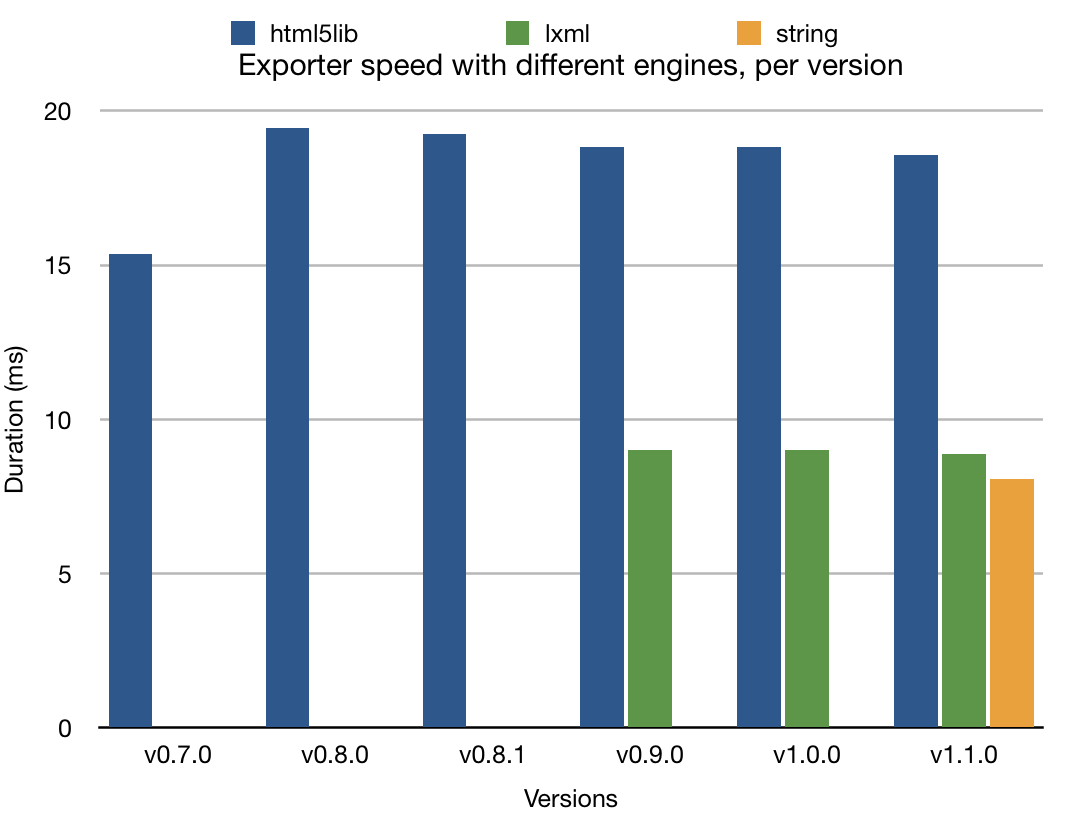 Exporter speed per version, for each HTML generation engine.

The rightmost line is the latest progress: a new dependency-free engine, thanks to the feedback of @BertrandBordage, who knows a great deal about Python performance and optimisations (he made Django Cachalot, a popular ORM caching tool for Django!).

With the engine API, and the benchmark content work done previously, we were able to meaningfully compare the impact of various optimisations, and of the different engines:

All in all, we went from 5 seconds to render the equivalent of one small blog post, to 500ms for 792 content chunks representative of one whole website!

With the HTML generation now operating only on strings without any further dependencies, it feels like the next speedups will be much harder to reach. Here are some areas to explore:

Starting this process, I would have never thought that the biggest speedups would come from fixing programming mistakes. Having the tooling in place quickly made these obvious, and came with the biggest speedups (20-30x). Hunting for further improvements forced us to rethink the API of the exporter, and led us to simplifying it greatly to match that of React. Finally, we had to consider real-world content workloads over experimental ones to find further speedups. In the end, it’s not just the exporter’s performance that has improved but its overall quality and usefulness as a general-purpose library.

For Wagtail, introducing components that are performance-tested (and heavily unit-tested, more on that in another post) increases the confidence that the changes will not have adverse effects for end users, and generally raises the bar for software quality. Now onto Draftail performance testing!

Special thanks to @su27, Loic Teixeira, and Bertrand Bordage for their help building the exporter. Thanks to Springload for supporting building this open-source project in the first place 💚.