It’s been a while since the last Draftail release! Draftail v1.1.0 is out; the CHANGELOG is fairly short but I thought it would also be good to report on what’s been happening behind the scenes.

This release comes with a new feature – support for form validation (and more), with onFocus and onBlur props for the editor. Thanks to @TheSpicyMeatball for making this happen.

It also comes with many bug fixes:

None of those bugs were that critical, but I’m particularly happy to see them addressed because the reports came from users of Draftail I didn’t know about. Draftail was originally developped for Wagtail, but we spent a great deal of effort to make sure it would be usable (and good!) outside of the CMS as well. It’s good to see others using the editor, and contribute to its maintenance.

The last major feature changes in Draftail happened nearly a year ago – v0.17.0, with two subsequent patch releases, which graduated to v1.0.0. This is a long time in the current JavaScript landscape, and part of the reason for this was that I was really concerned with adding features onto a project where stability is paramount. Via Wagtail, Draftail is used on hundreds (thousands?) of websites, and we definitely want to minimise breakage when making changes.

To help with this, I worked on a number of much needed behind-the-scenes improvements to Draftail as a project:

Danger helps enforcing the parts of the software development process that are not automated: keeping the documentation up to date, making sure new code comes with tests, assessing new dependencies added onto a project, etc.

Last but not least, Draftail also has new documentation and demos!

The Draftail documentation used to consist of a very long README, which kept things simple, but also very (very) short. Now, everything lives at draftail.org, a brand new website built with Docusaurus! 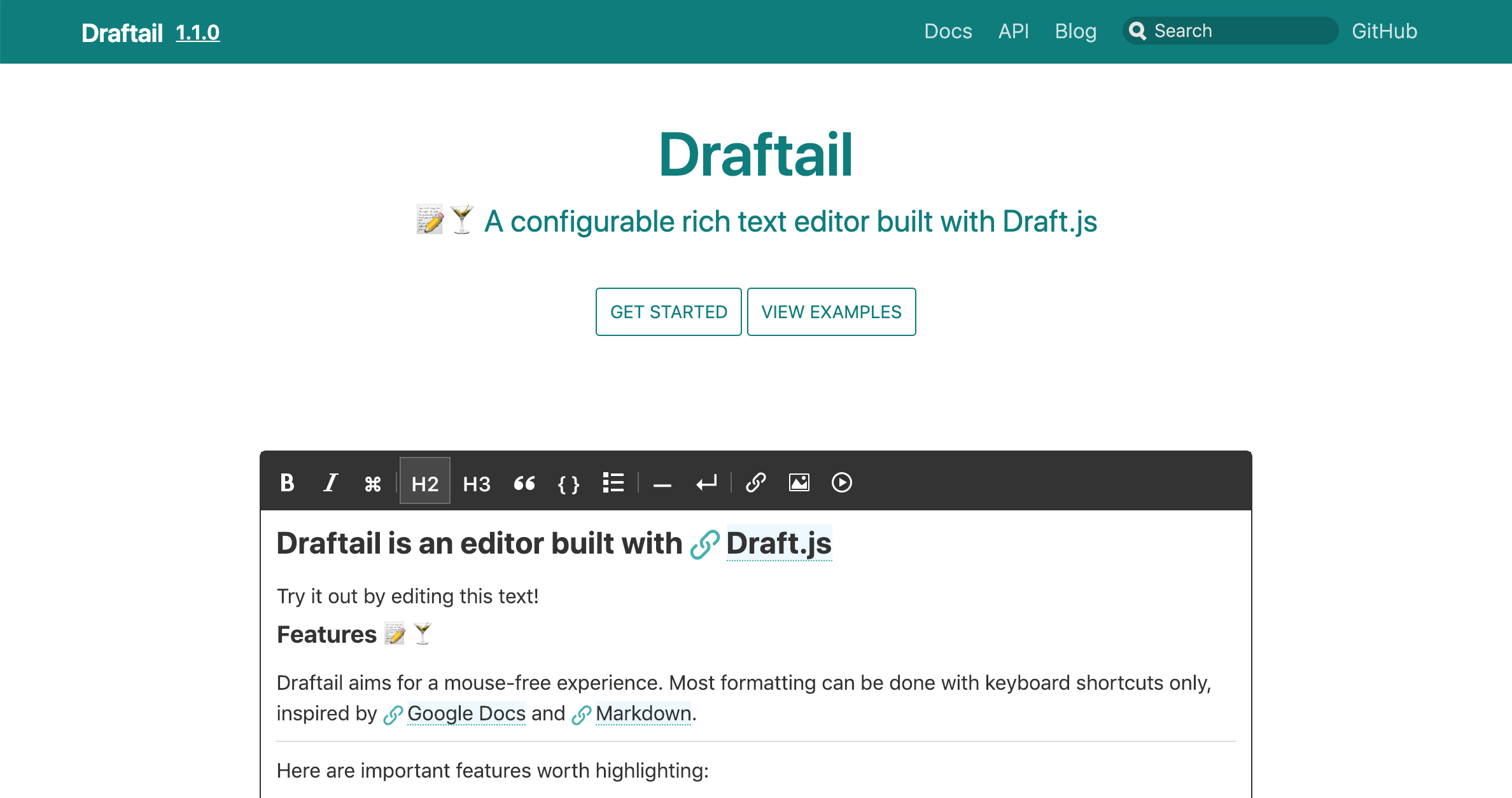 Building a full-fledged documentation website is obviously more work than a README, but it comes with many advantages:

Finally, the last thing I love about this new documentation is that it can contain live examples of the editor in iframes.

As part of Hacktoberfest 2018, the examples / demo / playground site for Draftail was rebuilt with Storybook (#163). 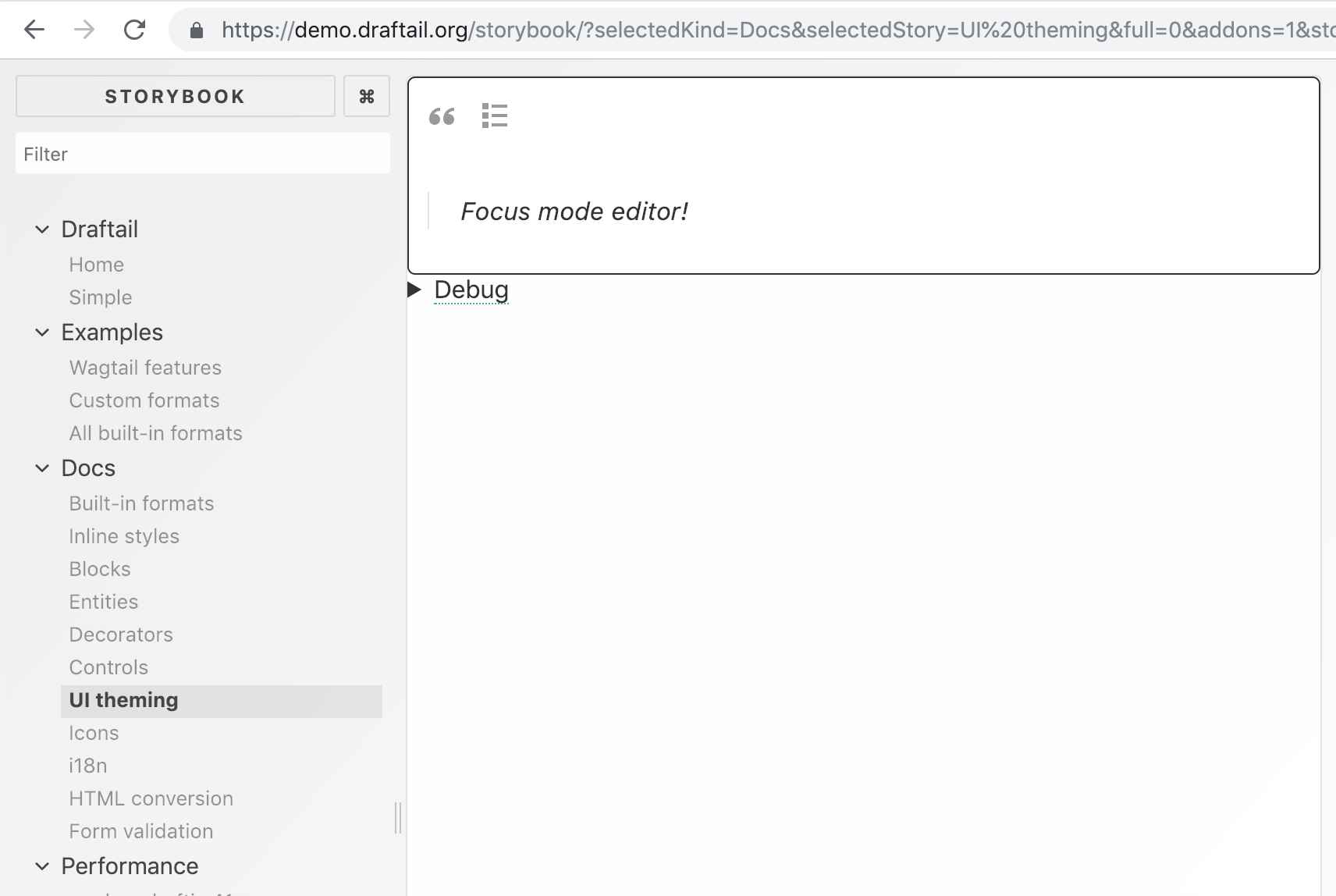 Demo of the editor’s theming capabilities. The left-hand menu lists all of the demos/stories.

Here as well, compared to the previous two-page site, this has made it possible for me to build (and keep organised) many more examples, as well as having separate self-contained examples for all of the parts of the API. Storybook also happens to be a great development environment, with great hot reloading capabilities and custom UI panels to help with development.

I’m really happy with how easy to maintain the editor is because of all of those changes. It’s easy to be confident in code changes because of the extensive linting and tests. The ease of changing documentation and creating new demos makes it easy to support people trying to solve specific problems with the editor. More than anything, I’m happy that the new documentation makes it easier for people outside of the Wagtail world to use the editor. Now, onto new features!

I have been working on making Draftail compatible with the draft-js-plugins architecture thanks to the support I receive on Patreon, and this is very close to being ready. This will effectively make it possible to build much more advanced extensions to the editor, without reinventing too many APIs. This is very exciting (at least to me!) because it will make it possible to experiment much more with the editor’s features without compromising its stability. I’m particularly keen to add new means of interacting with content:

If you want to keep track of how this is all coming along, have a look at the WIP draft-js-plugins compatibility pull request, and come chat in the #draftail Slack channel.